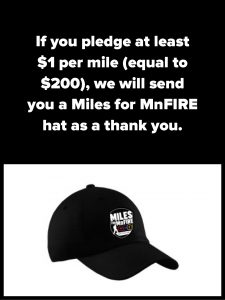 MnFIRE’s newest fundraiser is a walk across Minnesota to raise awareness and much-needed funds for firefighter health. The multi-day event kicked off on September 12 near Marietta, on the westernmost edge of the state, and made its way through numerous Minnesota communities, including Lac Qui Parle, Chippewa, Kandiyohi, Meeker, McLeod, Carver, Hennepin, Ramsey counties. The walk ended the following weekend at the Minnesota Fallen Firefighter Memorial on the grounds of the State Capitol in St. Paul.

Dressed in firefighter gear, Chanhassen firefighter Doug Foote walked the entire 200-mile route, and was joined along the way by other firefighters, their families and community members to show their support for MnFIRE’s important mission.

You can support Miles for MnFIRE either as a corporate sponsor or a donor. Your support will help ensure that more firefighters receive the life-saving services in three key program areas: heart health, emotional trauma, and cancer prevention and support.

For more information or to secure a sponsorship, contact Doug Foote.

Chanhassen Firefighter Doug Foote’s 200-mile walk across Minnesota will come to an end this Saturday at approximately 2:30 p.m. As he approaches the final mile of his journey, dozens of firefighters from across Minnesota are expected to don their turnout gear and walk with him to the end site at the Minnesota Fallen Firefighter Memorial site on the State Capitol grounds.

Doug’s long trek from Marietta to St. Paul has so far raised more than $13,000 for MnFIRE to continue its mission of supporting Minnesota firefighter health. Throughout his walk, he’s been joined by other firefighters, their families and community members who have seen firsthand the alarming rate of heart attacks, suicide and cancer affecting Minnesota’s hometown heroes. Donations are being accepted here.

On Saturday, Doug will begin the final leg of his journey by leaving from the Hopkins Fire Department at 7:30 a.m., then work his way through St. Louis Park and Minneapolis before finishing in Saint Paul.

WHEN: Saturday, Sept. 18. Firefighters will meet at Saint Paul College at 1:45 p.m. and join Doug Foote en route around 2:00 p.m. The group is expected to get to the State Capitol Grounds at approximately 2:30 p.m.

WHERE: Saint Paul College (walking down Marshall Avenue to John Ireland Blvd.) to the Minnesota Fallen Firefighter Memorial at the State Capitol

THANK YOU TO OUR SPONSORS:

The Minnesota Firefighter Initiative (MnFIRE) is dedicated to providing Minnesota’s firefighters with the tools they need to prioritize and protect their health by focusing on the three health problems most commonly experienced by those in the fire service: cardiac, cancer and emotional trauma.